I had high expectation with Skyfall. It commemorates 50 years of James Bond (Dr. No, the first James Bond movie was premiered on October 5, 1962,) Skyfall must have be a cultural milestone to it all. At first watch I didn’t like it immediately. Disclaimer: long pause since I saw the movie and actually writing review about it might have parts in it.

I grew up watching every James Bond movies around Roger Moore, and because of that, to me what James Bond is a suave secret agent with beautiful female co-stars (Bond girls), hi-tech weaponry and gadgets, nice cars, exotic locations and charismatic villains. Skyfall is an antithesis to majority of James Bond’s attribute, at least in my mind. It’s all stripped down back to basics, even simpler and more basic that the standard James Bond. First review was: Skyfall is like a reboot of a reboot (Casine Royale was considered a reboot of James Bond movie franchise.)

Then I saw Everything or Nothing: The Untold Story of 007, a documentary about James Bond movie and its creator Ian Fleming and producers Albert “Cubby” Brocolli & Harry Saltzman. Then I gain some perspectives on James Bond in general, and Skyfall in particular.

James Bond is depicted being ‘killed’ in the opening sequence, to be resurfaced again (reborn) to answer to his superior “M” (Dame Judi Dench; which is also killed by the end of the movie, making way to a male “M” played by Ralph Fiennes.) The featured James Bond car is Aston Martin DB5, a reprise from Thunderball. The finale also takes place at James Bond childhood manor in Scotland (aptly named Skyfall.) The gadget was just a “radio.” The weapon is back-to-basic Walther PPK, only with fingerprint recognition feature.

The villain (a gay ex agent named Silva, played brilliantly by Javier Bardem) also emphasized as an ‘invisible’ villain, a villain within us, it’s no longer a black-and-white world anymore (this already been in the minds of James Bond’s filmmakers since introduction of Pierce Brosnan as James Bond in Golden Eye, where Russia is no longer the enemy.) To the “Bond” girls, Daniel Craig’s James Bond is cold. Maybe that his love is only Vesper Lynd (Eva Green) in Casino Royale (we demand more skin, just because it’s James Bond!) The finale fight scene is plain and not so James Bond-ey.

In the end, Skyfall is an homage to the legacy of James Bond. That’s why the poster is a simple Daniel Craig in classic James Bond pose, in front of famous 007 diaphragm silhouette. Happy 50th anniversary James Bond. Here’s my martini, shaken not stirred.

P.s.: If you are aware, James Bond’s interviewer in the 2nd trailer looks a lot like Sean Connery. 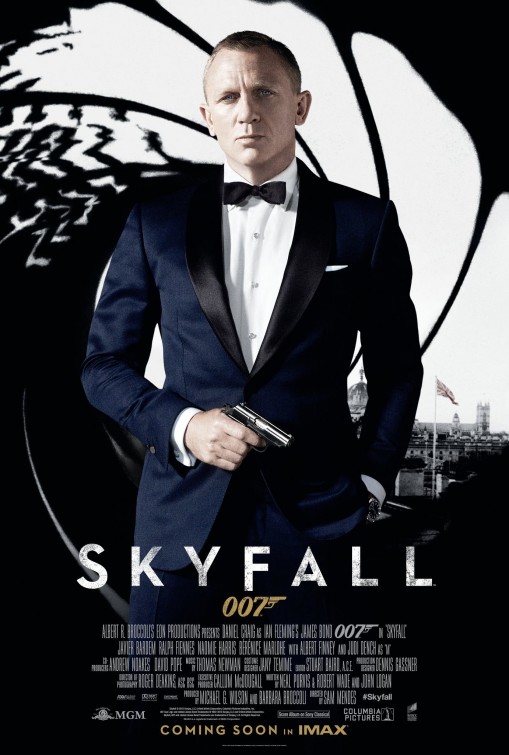